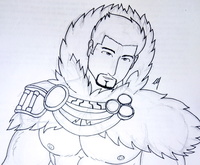 The Birth of Empire of Oristelle

A summary by Chronicler Giuseppe of Sorcros


The vast northeastern lands were once called ‘The Northeastern Void’ by neighboring kingdoms of Bejeon, Cheonguk, Geocheonguk and Sucheonguk. They considered themselves as north. No one could remember when it started but they have sent countless explorers to expand their territory but whenever they attempt to do so, they could not proceed because of an event or so happened. It was as if the land was bewitched and protected by some unknown force. The unknown always scares mankind.


Few of the explorers who came back were delirious or barely alive. Two thirds of the explorers who were sent to this "void" land were consumed by the harsh wilderness. The ones that came back told the news of few human settlements or tribes. These tribes were clusters of humans fleeing from the mentioned kingdoms. They seek a new lease in life and formed groups which moved throughout the vast expanse of the northeastern land. Some of them had formed a family and these clusters of humans then formed small communities. As groups formed, conflicts and unions became norms. These tribes wrr


Among these settlements, there was one that was called Duat. It was situated just the eastern border of Bejeon and northwest of Geocheonguk. It was known to have a fair maiden called Kalim. She was a bright and easy going however her brilliance exceeds to the current era. While girls of her age stayed with their respective settlements to sew, weave and gather, she was keen to trade, hunt and ride a horse. She was more interested in trading things as well as knowledge among her peers. She loved gaining new insights and creating new approach in everything she does.


Through the years, her the Duat settlement was not surprised of her moving around if she is not hunting. She went to nearby neighboring settlements and mingled with the crowd there. She learned of bartering what she hunted for knowledge or items that piqued her interest. It was not long after when she boldly proposed a steady trade between settlements which allowed the influx of goods and knowledge flow within Duat and two nearby settlements. While it was a mere experiment for her, the communication and resources were doubled. By this time, elders looked up to her as someone with formidable knowledge.


In a matter of months, more human settlements were trading using her network. Unconsciously, her influence grew and she was referred to as "Maiden of Duat" as she encouraged leaders, elders and commonfolk about trading knowledge whether it was in the form of equipment making, farming or even stories of myths and legends. This introduced farming to other settlements who had none and horsemanship to the other. The settlements thrived through harsh winters.


Few years gone by most settlements were running like city states. Villages were expanding and running similar to small city states while there was no formal banner of a country, these settlements formed a tight bond through communication, and trade. There were clamor of establishing a country among the people but no formal push among them, elders and heads were contented with the independence of these small states. Even Kalim, the maiden whom everyone adored by the villages was contented with such governance that a country should not be established.


The Maiden of Duat was continuously connecting settlements further north. However, a fatal excursion that almost eliminated the settlement of Tartes near Duat. The army Sucheonguk killed half of the settlers as to pretense that they are illegally settling within their land whereas it was already known that they are far from the last western town of Sucheonguk. The neighboring kingdoms of Bejeon, Cheonpojguk, Geochenguk caught this activity and soon followed. The tribes who were on these borders fled north. These invaders were shameless. They tilled the land only to be reclaimed by these barbarians.


The Maiden of Duat and her husband along with their child, Yubis, were visiting the northern peninsula when they were given the news. She and Her husband went back to aid Duat but left in the care of the Sorcros elders.


Kalim and her husband rallied troops to aid Duat however they were overwhelmed by the consortium of four kingdoms. Instead of defending the once flourishing Duat, they concentrated on defending fleeing settlers. While the refugees flee, Kalim's husband was slain. She herself was caught by the army of four allied kingdoms.


Despite being a mother at a young age which usually was the practice in most village states, Kalim was rumoured to be a beauty which also spread to the neighboring kingdoms. At the time of her capture, commanders feasted and mocked the maiden even if these kingdoms considered as these village states as savages.


The young Yubis silently followed his parents and made the perilous journey to Duat which proved to scar the youth with this memory. He saw his father was slain from afar and his mother whom he adored being dragged away half naked and humiliated to the enemy camp. He wanted revenge however he was stopped by his mentor from Sorcros and was taken away from the battlefield.


The memory of his parents being captured, humiliated and eventually killed was a turning point for Yubis. The invasion of the four kingdoms was also a wake up call to the remaining village states in the north. The remaining village states in the north like Sorcros accepted refugees. Settlements from the south flee further north where they are welcomed by the northern settlements. This communication and cooperation were once an idea of the Maiden of Duat is now in motion but they already lost the progenitor of this system.


For the next few years, the young Yubis trained in Sorcros. Like his mother, he wanted to continue the network with the remaining villages. He then proposed about exchanging weaponry and tactics instead. Utilizing the hunters in the north, he reformed tactics. While the kingdoms of the south had not advanced due to conflict amongst them, he employed the earliest guerilla tactics which proved to be fatal. He combined it with his proficiency with knowledge he acquired, using poison and plague to enemy armies.


The remaining village states also retaliated and sent manpower to the guerilla warfare to reestablish the farmlands of the south. Led by Yubis and other leaders of the remaining village states. They quickly conquered back the lands from the south, Cheonpojguk conquered lands were reclaimed and their army vanished overnight. Geocheonguk and Bejeon occupied lands were suddenly stricken with plague, leaving Sucheonguk in the south. Due to the lethal use of poison, the remaining armies scattered and feared food within the lands.


By winter, a harsh reality dawned on invading armies. While the northern tribes endure harsh winters the four other armies weren't accustomed to the brutal weather. Combined with poisoned or plague stricken food and cold weather they could only retreat back south. The retreat proved fatal ro remaining regiments and pulled back and guerilla attacks continued by the northern militia.


Yubis earned the nickname "poisontail", he was the leader during guerilla attacks and the brainchild of covertly putting poison to provisions of enemy armies. Even his allies shivered to the ideas of killing people by large numbers. But they were thankful that there were lesser numbers to fight on.


By Spring, only scattered remnants of the armies remain. The northern tribes on the other hand had convened in Sorcros to consolidate the remaining forces and establish the kingdom. Under the leadership of guerilla and poison tactics, he was elected as the leader of the Oristellian kingdom.


By the next autumn while expelling foreigners from the southern marshes, King Yubis proposed of using captured soldiers to fight their former comrades. He experimented on enemy soldiers to coerce them to fight head with the pretense of using poison to these men. This proved brutal to captured soldiers acting as ticking time bomb to the remnants of the armies from the south. While he reclaimed his hometown Duat, he started to conquer outlying territories of the four kingdoms who were once their invaders. The kingdoms were helpless as their war effort were in vain they could not maintain to reclaim the land.


The monarchs of the four allied kingdoms had also started fighting amongst themselves at the onset of winter. Without the strength of the army, who would protect them? The infighting caused the royal families and nobles killed pinpointing against each kingdom of who killed who. The populace of the kingdoms were rioting as key nobles and royals died or were seriously injured.


Unknown to them, the previous guerilla army were the one who had instigated the scandals and killings. They never knew it was the northern savages who had blended with the masses and triggered the unrest. They planted items that they had collected from retreating armies and ambushed supply caravans to create confusion among the ruling nobles from different kingdoms. Dissatisfaction broke out as objections were profusely raised the nobles and common folk to their respective rulers which resulted to the gradual fall out among the four allied nations. The defence from the guerilla attacks from the Oristellian battlefield weakened further since the allies were wary of each other. It was a fatal flaw as loss after loss resurfaced and increasing dissatisfaction were expressed.


By spring, the monarchs of Geocheonguk, Sucheonguk, Cheonpojguk and Bejeon had been invited by Yubis. While infighting continued and led to a dysfunctional alliance, they were wary of the looming presence of a coordinated army of once they called savages. The Banquet of Duat was held on the grounds were his mother and father were killed. He poisoned the monarchs invited, w. On the old Duat Settlement grounds and he forced each monarch to sign the Treaty of Duat in exchange of the antidote. In front of the masses of the northern settlements and the survivors of the invasion of the four kingdoms, Yubis proclaimed establishment the Empire of Oristelle and was crowned Emperor Yubis I.

"As the Oris flowers bloomed upon the graves of our people, I, Yubis from the House of Duat, swear upon the graves of my father and mother, will rebuild what we lost for the glory of our new empire."
- An excerpt from Coronation of Emperor Yubis I